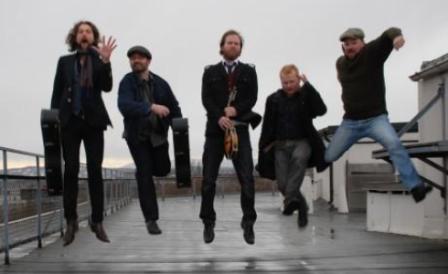 Moving Day! is one of Oslo's newest bluegrass bands, playing traditional bluegrass standards and surprising adaptations of anything else we can get our hands on: sizzling instrumentals, heartbreaking ballads, songs of murder, love, loss, and hope. Moving Day! takes its inspiration from the old-time music revival in New York in the early 60s, where traditional American folk music was adapted, bent and twisted to fit the insanity of the times. Those times are still around, only even more twisted. Founding member Paul Kirby probably comes from a long line of banjo players, going all the way back to his distant relative Bashful Brother Oswald Kirby, who played at the Grand Old Opry in Nashville for over 30 years, and was a key member and prime influence in Roy Acuff's band. Messrs. Frank-Runar Gansmo and Ãystein Imsen are both classically trained musicians who have experience with a wide spectrum of folk music. Moving Day! works frequently with guest artists such as Norwegian 'Spellemannsprisen' winner Are Fevang, tenor Hallvar Djupvik, and the spectacular young guitarist Arild von HammerÃ¸.