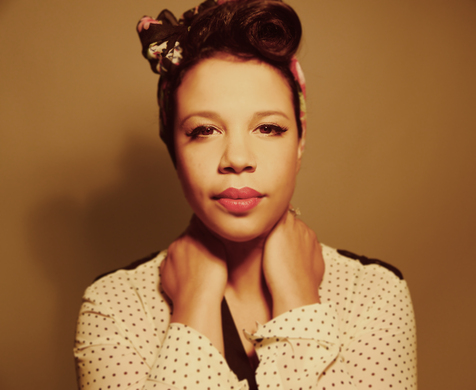 There's no need to sugar coat it, since her impressive credits speak for themselves. Her colleagues praise her ability, her dedication and drive to perfecting her craft as a professional singer and knockout performer. On stage and in the studio, New York City based vocalist and songwriter Shayna Steele proves she is a vocal force to be reckoned with.

Born in Sacramento, California, to a black father and a white mother, Steele lived the itinerant childhood of an American Air Force brat. Moving from California to Oklahoma and then to Ramstein, Germany, where she spent seven formative years, she had little chance to contemplate her racial identity until her family landed in Biloxi, MS in 1985. She explains, "Ramstein took up quite a bit of my early childhood and had a big influence on how I viewed life, the world and especially racial tension. Living amongst the safety of an Air Force Base in Germany with many other children from bi-racial families gave me a false sense of security and I wasn't quite ready for the criticism and ridicule I would receive when we moved to Mississippi." Feeling "awkward, out of place and unsure where to fit in" in Biloxi, she dove headfirst into music, entering (and winning) several pageants and talent shows, including an appearance on Ed McMahon's Star Search at the tender age of 15. Star Search was her first experience performing in front of a nationally televised audience. After losing by a 1/2 star, Shayna returned to Mississippi to finish high school and pursue a music degree before exposing herself to the cutthroat "reality" of the business. "I was embarrassed and defeated. I wanted nothing more than to go home and crawl in a hole"

"I never really felt 'grounded' until I moved to NYC. It was then that I really opened up to different genres of music other than R&B." Schooled in jazz by her Godfather, self-taught and guided by her musician father and gospel by her choir director, the Grammy-nominated Michael McElroy, Steele began to develop her sound, blending new influences, from Ledisi to Rachelle Farrell, with her childhood icons Stevie Wonder, Aretha Franklin, Chaka Khan and the Temptations. A completely unexpected call in 2005 would drop her squarely in the middle of genre she had absolutely no experience with: Electronica. Hearing that Moby "needed a screamer" for a track off his new album Hotel, a mutual friend recommended Steele, resulting in the disc's second single "Raining Again". Two years later, she was back, laying down vocals for "Extreme Ways (2007)" - Moby's theme song to The Bourne Ultimatum - and in early 2008, "Disco Lies", the first single off Moby's 2008 release Last Night. The song reached #1 on the US Billboard Dance charts and went on to be featured in J.J. Abram's summer blockbuster Cloverfield and the movie The Backup Plan starring Jennifer Lopez. Her voice has remained high in demand with recent vocals on Hairspray (movie soundtrack), 2012's The Bourne Legacy, Sex and the City 2, NBC's Smash, 2008 Summer Olympic highlights on BBC, The Shanghai Restoration Project and HBO's "The Sopranos".

Steele started writing music with partner David Cook in 2002. The two quickly developed a creative synergy, collaborating on Steele's eponymous debut EP in 2004. Though self-released, the album's breakout soul-funk single "High Yella" achieved the attention she needed to raise her solo profile. She and/or her band have since shared the stage with luminaries Ledisi, opening for George Clinton and the Sugar Hill Gang, a featured singer with Bjorkestra and Grammy winning conducter/composer/trumpeter Dave Douglas, featured with Snarky Puppy in 2014 at the Nice Jazz Festival, the Estival Jazz Festival and the North Sea Jazz Festival, the Grammy- nominated Broadway Inspirational Voices and as a sideman with Lizz Wright, Bette Midler, Natasha Bedingfield, John Legend, Matthew Morrison, Yeah Yeah Yeahs, Queen Latifah, Dolly Parton, Rihanna and Kelly Clarkson.

It was the release of Shayna's first full-length album I'll Be Anything co-written with Cook that put Shayna on the map as a legitimate solo artist. She was soon sought after by clubs in Los Angeles and San Francisco, New York City, Milan, Rome and Zurich, welcoming her to packed rooms and a dedicated fan base. Shayna and the band have toured and continue to tour extensively throughout the United States and Europe. In 2013, Shayna's original song "Gone Under" was recorded live for DVD on Snarky Puppy's Family Dinner, Volume 1, where the band received a Grammy Award in 2014 for their performance of "Something" with Lalah Hathaway.

Her experience has lead to appearances on: Conan O'Brien, The Grammy Awards, The Tony Awards, The Tonight Show, David Letterman, Saturday Night Live, The Oprah Winfrey Show, American Idol, The Brit Awards, Jimmy Fallon, Good Morning America,The Today Show, The Billboard Music Awards and the Academy of Country Music Awards as well as contracting and/or doing vocals for Season 1 and Season 2 (contractor) of NBC's Smash and America's Got Talent and the shows Rent, Jesus Christ Superstar and Hairspray on Broadway in New York City.

Most recently, Shayna went to Paris to record a song for saxophonist/songwriter Manu Dabango's (Soul Makossa) upcoming project. Shayna continues to work non-stop in music out of their home teaching privately, recording, writing and creating in addition to being one of the most high in demand and sought after gigging musicians. She currently finished recording her second studio album to be released in January 2015 with tour dates already booked in Geneva, Zurich, Bologna, Paris and Berlin in February of 2015.

"What an amazing voice; sounds like she should have been making disco records in 1978, which to me is the highest compliment I can give a singer." â Moby