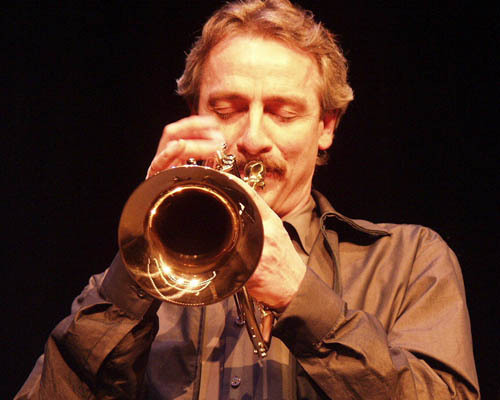 Equally at home in a multitude of musical idioms, Allen Vizzutti has visited 40 countries and every state in the union to perform with a rainbow of artists and ensembles including Chick Corea, 'Doc' Severinsen, the NBC Tonight Show Band, the Airmen Of Note, the Army Blues and Army Symphony Orchestra, Chuck Mangione, Woody Herman, Japanâs NHK Orchestra and the New Tokyo Philharmonic, the Budapest Radio Orchestra, , the Saint Paul Chamber Orchestra, the Leipzig Wind Symphony and the Kosie Wind Orchestra.

From his home in Seattle Washington, Allenâs current career activities embody an impressive schedule of recitals, concerts, recording and composing. His continued commitment to music education and the value of music in everyday life results in an extensive schedule of guest appearances at universities throughout North America, Europe, Japan and Australia.

Allen's solo jazz recordings include CDs such as, "Ritzville", (Village Place Music), and âTrumpet Summitâ and âSkyrocketâ from Summit Records. Classical CDs currently available from DeHaske Music Publishing Recordings are âThe Emerald Concerto and Other Gemsâ, with the Budapest Radio Orchestra, âVizzutti Plays Vizzuttiâ and âVizzutti and Soli On Tourâ. His âHigh Class Brassâ, (available on iTunes), is a wonderfully unique classical and jazz blend co-produced and performed with fellow trumpet artist, composer and conductor, Jeff Tyzik along with a 90 piece studio orchestra. Also of interest are âBaroque and Beyondâ, from Sony, âThe Carnival of Venusâ, (Summit Records), and âA Trumpeterâs Dream, (Ludwig Music Publishing).

Allenâs love of expression through composition has led to premier performances by the Los Angeles Philharmonic, Budapest Radio Orchestra, the Royal Philharmonic of London, the Nuremberg Symphony, Rochester Philharmonic, Syracuse Symphony, London Symphony, the renowned Summit Brass and others. After the world premier of his âEmerald Concertoâ with the Syracuse Symphony Allenâs writing was described in review: âThe Emerald Concerto sparkles!...a vivacious treatment which speaks well for both his dramatic instinct and technical prowess as a composer.â
âFinely tuned wind, easy control, polyharmonic wit, orchestral penmanship, punctuated spiritual warmthâ¦rarely do so many qualities find themselves in one musician.â
-Chick Corea

While growing up in Montana, Allen was taught by his father, a self taught musician and trumpet player, until he left home to attend the Eastman School of Music on full scholarship. There he earned the Bachelor of Music and Master of Music degrees, a Performerâs Certificate, a chair in the Eastman Brass Quintet faculty ensemble, and the only Artistâs Diploma ever awarded a wind player in Eastmanâs 85 year history.

While living in Los Angeles during the 80âs, Allen performed on over 100 motion picture sound tracks, (such as Back To The Future and Star Trek), as well as countless TV shows, commercials and recordings with such artists as Frank Sinatra, Barbra Streisand, Neil Diamond, Chick Corea, the Commodores and Prince. His soaring sounds can be heard on recent projects including the movies "Furry Vengeance", â40 Days and 40 Nightsâ, âUnfaithfully Yoursâ, Gridiron Gangâ, âScary Movie Fourâ, and the âMedal of Honor", "Gears Of War 3" and âHaloâ video games.